Dechaine: ‘What I sensed … was relief’

Prisoner Dennis Dechaine, in his first interview with the media since his suicide attempt in April, said Friday he believes prosecutors have charged him with trafficking in prison contraband as payback for his outspokenness about his case, and also to undermine his pending motion for a new trial.

Joined by his attorney Steve Peterson, left, of Rockport, Dennis Dechaine speaks to a reporter at the Maine State Prison in Warren in March. Dechaine, incarcerated since his arrest and subsequent conviction for the 1988 slaying of 12-year-old Sarah Cherry in Bowdoin, has a court hearing in September which his attorney has described as his “last, best chance” at a new trial. 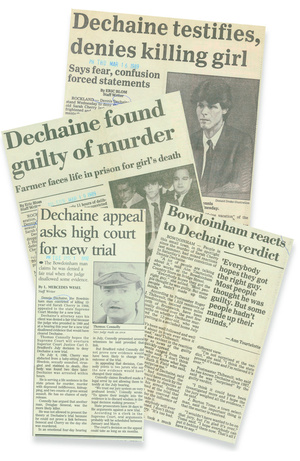 “This is nothing more than a political ploy,” Dechaine said in a 30-minute telephone interview from the mental health unit at the Maine State Prison in Warren.

“I think it’s a case of kicking a man when he is down,” he said.