Letters to the Editor - Trial and Error - Dennis Dechaine

Three years have now passed since Dennis Dechaine filed his motion for a retrial in order to present several forms of significant scientific evidence — DNA, time of death, et al. — of his innocence of the 1988 murder of Sarah Cherry.

It may help in understanding how long this has been to remember that Merriwether Lewis and William Clark took three years to explore vast areas of the continental interior in the 19th century.
Three years is almost how long it took the United States to fight World War II.

Attorneys and judges cannot have forgotten the three years it took to complete their entire law school education.

If Dechaine were guilty, wouldn’t he give up?

I totally agree with Peter Sirois (letter, July 1). I have been following the Dennis Dechaine case for more than 20 years and have saved most of newspaper clippings.

I believe him to be innocent. Most people, if they were guilty, would give up trying to prove themselves innocent after all this time. Why won’t they give Dechaine a chance to prove it? What are they hiding?

God will be their judge, and their punishment will be worse than that handed down by any court judge.

Webster’s dictionary defines hubris as “wanton insolence or arrogance resulting from excessive pride,” and defines complicity as “partnership in wrongdoing.”

The Dennis Dechaine case illustrates how the Maine Attorney General’s Office has demonstrated both for more than two decades. That office has seriously compromised its mission of “justice for all” and rendered its actions suspect, regardless of the attorneys serving in that office.

Starting with James Tierney in 1989, the year of Dechaine’s trial, to William J. Schneider, the current attorney general, the AG’s Office has been smug in its righteousness and self-granted infallibility.

“In Maine, we’re different,” asserted deputy AG William Stokes when I pointed out that in light of the frequent exonerations nationwide wouldn’t it be possible that Maine has a few innocent people in jail?

Dechaine’s jury didn’t have all the evidence

Generally, I don’t follow many criminal cases in the news.

I believe that a jury of peers will examine the evidence presented and come up with a verdict as designed by our Constitution and penal code. In the Casey Anthony trial, however, I did develop an interest because of “grocery line chatter. ”

It seems that many people already had the woman declared guilty long before the trial was over. Of course, the jury was required to listen carefully to all of the evidence and non-evidence. Though I was not in the courtroom, I gathered from news reports that there never really was any actual evidence as to the how, where, who and when the crime was committed. Those are critical factors necessary to assign guilt, particularly in capital cases.

If a little girl was tortured and murdered in Maine today, would the state’s response be very different from that which followed the 1988 murder of Sarah Cherry? 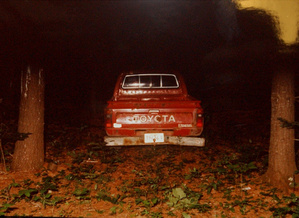 A police photo of Dennis Dechaine’s pickup truck taken on July 6, 1988, the day Sarah Cherry disappeared. The truck was found near where Cherry’s body was discovered. Press Herald file. Select images available for purchase in the Maine Today Photo Store

Would an incomplete autopsy be performed and time-of-death evidence ignored? Would fingerprints and a blood sample be lost? Would the state block DNA testing?Would untested biological evidence be incinerated without the court or the defense being notified? Would exculpatory evidence regarding a targeted suspect be ignored, while other suspects were given a pass?Would the state block the findings of its own psychologist from being heard by the jury? Would police give testimony which contradicted their notes, and would those notes then be withheld?Would the state’s case rest on circumstantial evidence and false testimony? Would the case files be sealed? And would the defendant be convicted by irresponsible media reporting even before the jury did?Were such a case to be handled so outrageously today, would influential Mainers of good conscience loudly protest? Or would they remain as silent as they are now as the state once again opposes a retrial for Dennis Dechaine, the victim of the procedural abuses listed above — and more?

LD 373 was signed by the Governor and enacted into law.

What does ‘beyond a reasonable doubt’ mean?

How much proof is “proof beyond reasonable doubt”?

Wikipedia states, “Proof beyond reasonable doubt is the standard of evidence required to validate a criminal conviction in most adversarial legal systems (such as the United Kingdom and the United States). Generally the prosecution bears the burden of proof and is required to prove their version of events to this standard … to the extent that there could be no ‘reasonable doubt’ in the mind of a ‘reasonable person’ that the defendant is guilty.”

Is there reasonable doubt about the conviction of Dennis Dechaine? Let me count the ways:

Dechaine requested and offered to pay for DNA testing before the trial, but the court refused to allow it on grounds it would have delayed the trial. Yet both blood typing and later DNA test results from tissue under the victim’s thumbnail exclude Dechaine.

Bill could have freed an innocent man

There used to be a standard of justice here in the United States. There was a time that it was better for 10 guilty men to go free than for one innocent man to languish in prison. Now we hear that the judicial committee of the Legislature has put the kibosh on a bill that could have freed an innocent man.

Whether Dennis Dechaine is innocent is really irrelevant. The ability to introduce evidence after a conviction, especially evidence of innocence, should be something that we all want.

I am appalled that Sarah Cherry’s family is willing to keep in prison a man who may not have committed this atrocity.

Still angry with Rowe and Stokes about Dechaine DNA

Every day that Dennis Dechaine spends in jail, the worse Maine looks, resurrecting the image that the state is behind the times in stubbornly maintaining that it cannot make any mistakes, a position that is ironically held by the very agency that is supposed to keep up with the times-our won Attorney General’s Office.

When I was in the House of Representatives, I met with then Attorney General Steve Rowe and Assistant AG Bill Stokes over the inconsistencies of the Attorney General’s Office in the Dechaine case.

December 18 2010
On Nov. 18, the political cartoon on the the newspaper’s opinion page pictured four large knives and a little pair of nail clippers.

I immediately thought of Dennis Dechaine. His life is being cut up by the big justices, but a little pair of nail clippers could save his life. The justices refuse to allow the fact to be heard that the DNA on the nail clippings of Sarah Cherry is not that of Dechaine, but is that of another male, who very well could  have been the murderer.

In the same issue, Justice Carl Bradford refuses to allow the opinions of two highly respected pathologists. Their opinions are that Dechaine was in police custody at the time of the murder.

Bangor Daily News
It is encouraging to read Dennis Curley’s Dec. 8 letter about Dennis Dechaine. Not a day passes that I do not think about Dechaine and the suffering and humiliation he underwent and must still undergo.

Some time ago, I watched a one-hour program about the Dennis Dechaine case. The program was broadcast in the middle of the night. The investigation was thorough and complete. In this program, two investigators followed the Dechaine case, speaking with him and others until they arrived in Florida to the home of the person they believed killed Sarah Cherry. He did not come out when they called to him. In this program, the investigators proved Dechaine is innocent. Check out this website: www.trialanderrordennis.org for more information and updates.

There’s a smell around Maine’s judicial system, and it’s hung in the air around here for quite some time.

It’s the stink of injustice and its lingering, rancid odor that corrupts the independent minds of those who are so easily swayed to believe that their jobs are more important than the life of someone who is begging to prove his innocence. And you have to beg in front of the same judge who convicted you in the first place. What chance do you have? But that’s Maine law.

Dennis Dechaine has been in prison now for 22 years. He would like a retrial where all the evidence that the first jury never heard will finally be. Some being DNA evidence which in many other states, would have already exonerated him. Why are we in denial? Do we want to have a system that turns a blind eye to truth and scientific data?

Dechaine questions
Since January 1989, when Dennis Dechaine was denied his request for DNA testing on the evidence surrounding the gruesome death of Sarah Cherry, this case has been massively tilted in the state’s favor.

In the 22 years hence, new evidence has been unearthed and-or substantiated that both the state and the court do not want considered in new proceeding that surely should result in a new trial.

‘We all need the truth’ about Dechaine case

The Kennebec Journal’s opinion of Nov. 19, “Judge right to limit scope of Dechaine hearing” held several mistakes, one being there are two books out, not one.

I disagree about not looking at every aspect. If I were on a jury deciding a person’s life, I’d want every piece of evidence, every blood sample, every DNA result in order to make a decision that I would have to live with.

Leave no rock unturned. Our justice system doesn’t allow that, and it makes you wonder why? What are they afraid of? A cover up? Why not hear the opinion of not just one but two forensic pathologists.

Why weren’t the local sex offenders questioned? There were several in the area. Why can’t the medical examiner fix a time and date of death?

It all reeks of something not adding up. Let’s let it all be heard. It’s been too long now for all concerned. We all need closure. We all need the truth.
Sandra S. Choate
Farmingdale