Dechaine: ‘What I sensed … was relief’

Prisoner Dennis Dechaine, in his first interview with the media since his suicide attempt in April, said Friday he believes prosecutors have charged him with trafficking in prison contraband as payback for his outspokenness about his case, and also to undermine his pending motion for a new trial.

Joined by his attorney Steve Peterson, left, of Rockport, Dennis Dechaine speaks to a reporter at the Maine State Prison in Warren in March. Dechaine, incarcerated since his arrest and subsequent conviction for the 1988 slaying of 12-year-old Sarah Cherry in Bowdoin, has a court hearing in September which his attorney has described as his “last, best chance” at a new trial.

Thank you for publishing Trevor Maxwell’s piece on the Dennis Dechaine case. It’s journalism like this that makes me optimistic that local newspapers can survive.

Like most Mainers I’ve been somewhat aware of this case over the years but only in snippets or fragments. It was very helpful see the sad story from its beginning to the present. With a case this of this magnitude I can’t understand why the authorities have fought a retrial for so many years, especially with the science of DNA being so much more developed.

The fact that Dechaine was denied the use of DNA testing from the beginning is grounds for a new trial. It’s not like he’s asking for a pardon.

It’s almost like the prosecution doesn’t believe in their own judicial system.

Here is the article and the link to PPH and followed by Dennis’ letter to Trevor Maxwell.

Dennis Dechaine, who is serving a life sentence for murdering a 12-year-old girl in 1988, says he tried to kill himself with prescription drugs earlier this year.

In a letter sent this week to The Portland Press Herald/Maine Sunday Telegram, Dechaine said he “ingested a combination of prescription drugs in an attempt to end my life” in early April at the Maine State Prison in Warren.

A man serving time for a high profile murder has been indicted on charges of trafficking in prison contraband.

A man serving time for a high profile murder has been indicted on charges of trafficking in prison contraband.

The indictment alleges that on April fifth, Dechaine had morphine and / or klonopine. That was the week that he was rushed to the hospital, reportedly near death after his heart rate and blood pressure dropped. Dechaine was hospitalized for two weeks.

Prison officials have never said what he was treated for.
WCSH CHANNEL 6 NEWS CENTER

A Knox County grand jury has indicted convicted murder Dennis Dechaine on trafficking in prison contraband following a suicide attempt at the state prison in Warren.

In a letter sent this week to The Portland Press Herald/Maine Sunday Telegram, Dechaine said he had “ingested a combination of prescription drugs in an attempt to end my life.”

Dechaine, 52, is serving a life sentence for the 1988 murder of 12-year-old Sarah Cherry in Bowdoin. The Madawaska native has maintained his innocence through four unsuccessful appeals – as have a number of friends, family and others – and the case has been the subject of both legal and media interest over the years. This fall, he is expected to get a hearing before the judge who originally convicted him on whether Dechaine should get a new trial based primarily on a microscopic fragment of unidentified male DNA extracted from Cherry’s clipped thumbnail.

Famed defense lawyer F. Lee Bailey thinks the unidentified male DNA found on murder victim Sarah Cherry’s thumbnail is intriguing, but it might not be enough to get a new trial for prisoner Dennis Dechaine. 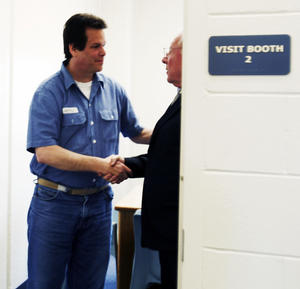 Inmate Dennis Dechaine shakes hands with attorney F. Lee Bailey, right, after a meeting at the Maine State Prison in Warren on April 8, 2009. “All that I promised to do, and have done, is to use past friendships and associations to get Dennis what he couldn’t afford,” Bailey said. “I don’t wish to be an advocate for anybody.”

The Hometown Perspective: For those who knew the young man, disbelief endures

MADAWASKA – The boys would play on the train tracks near their neighborhood, climbing ladders on the sides of the freight cars and jumping from one to the next. 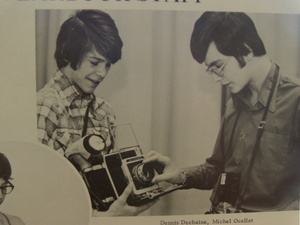 In a yearbook photo from Dennis Dechaine’s junior year at Madawaska High School, the teenage Dechaine, left, holds a camera that he used when he was on the yearbook staff. “The camera was bigger than him,” said his childhood friend Carol Waltman.

The Author: Private investigator digs – and becomes an advocate for Dechaine 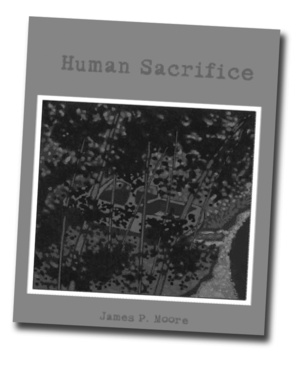 In 1992, a retired federal agent from Brunswick saw a notice in a local newspaper.

Trial and Error, the group of people who believe Dennis Dechaine was wrongfully convicted for a murder in 1988, was holding a meeting in town.

James P. Moore, a private investigator who had retired in 1985 from the U.S. Bureau of Alcohol, Tobacco and Firearms, recalls thinking that the group was likely a “bunch of birdbrains.” Out of curiosity, though, he attended the meeting.

The Alternate Suspect: Is former Mainer linked, or ‘nothing but speculation’?

Lawyers, friends and supporters who believe Dennis Dechaine was framed for the murder in 1988 of 12-year-old Sarah Cherry have pointed fingers at several possible alternate suspects.

But one name — Douglas Senecal — has been at or near the top of their lists since the beginning.

At least three judges, however, have found no credible evidence linking Senecal to the crime, and they have said Dechaine’s alternate suspect theory is nothing more than speculation.

Senecal himself says the target painted on his back forced him to move out of Maine shortly after Dechaine’s conviction. Being labeled as a possible suspect in one of Maine’s most infamous murders has essentially destroyed his life over the past 22 years, Senecal said in a brief telephone interview last week.

The prisoner says he is tired of telling the story.

Thirty-year-old Dennis Dechaine of Bowdoinham is escorted to his arraignment in the slaying of 12-year-old Sarah Cherry on July 12, 1988, four days after his arrest. Dechaine has been in custody since.

COMING NEXT WEEK: In Dennis Dechaine’s latest bid for a new trial, the key piece of evidence is a fragment of unidentified male DNA, extracted by scientists in 1994 from a thumbnail clipping of 12-year-old murder victim Sarah Cherry. Serving a life sentence for the crime, the prisoner hopes this trace of genetic material can alter his fate.

But there’s a court hearing on the horizon that could be his last chance at a new trial. There are some things that he wants the public to hear again.

Did this man kill Sarah Cherry?

Thirty-year-old Dennis Dechaine of Bowdoinham is escorted to his arraignment in the slaying of 12-year-old Sarah Cherry on July 12, 1988, four days after his arrest. Dechaine has been in custody since. 1988 file photo/The Associated Press

The prisoner says he is tired of telling the story.

But there’s a court hearing on the horizon that could be his last chance at a new trial. There are some things that he wants the public to hear again.

WARREN — Dennis Dechaine, one of the most notorious prisoners in Maine history, has maintained the same theme in the handful of interviews he has done with various newspapers and television stations since his conviction in 1989.

He claims he did not murder 12-year-old Sarah Cherry.

During an hour-long interview at the prison on March 22, Dechaine firmly stood behind that assertion, and he said he wanted the public to hear once again his thoughts about the case because his motion for a new trial is expected to be heard later this year.

It was his first interview with The Portland Press Herald/Maine Sunday Telegram in 18 years.

The Day of the Crime: What investigators found on path to grisly slaying

On the day she was kidnapped, Sarah Cherry of Bowdoin went to baby-sit for a local couple whose regular sitter had backed out.

It was the 12-year-old’s second baby-sitting job, and her first time watching a baby. But John and Jennifer Henkel did not have reservations about hiring Sarah. She was known in town as a mature, good-natured and athletic kid who was looking forward to starting junior high school that fall.

It was July 6, 1988, and a heat wave had settled over Maine, bringing temperatures close to 90 degrees.

According to court records, Jennifer Henkel checked in on Sarah by phone around noon. The girl was feeding the baby and preparing hot dogs for herself.
view full story